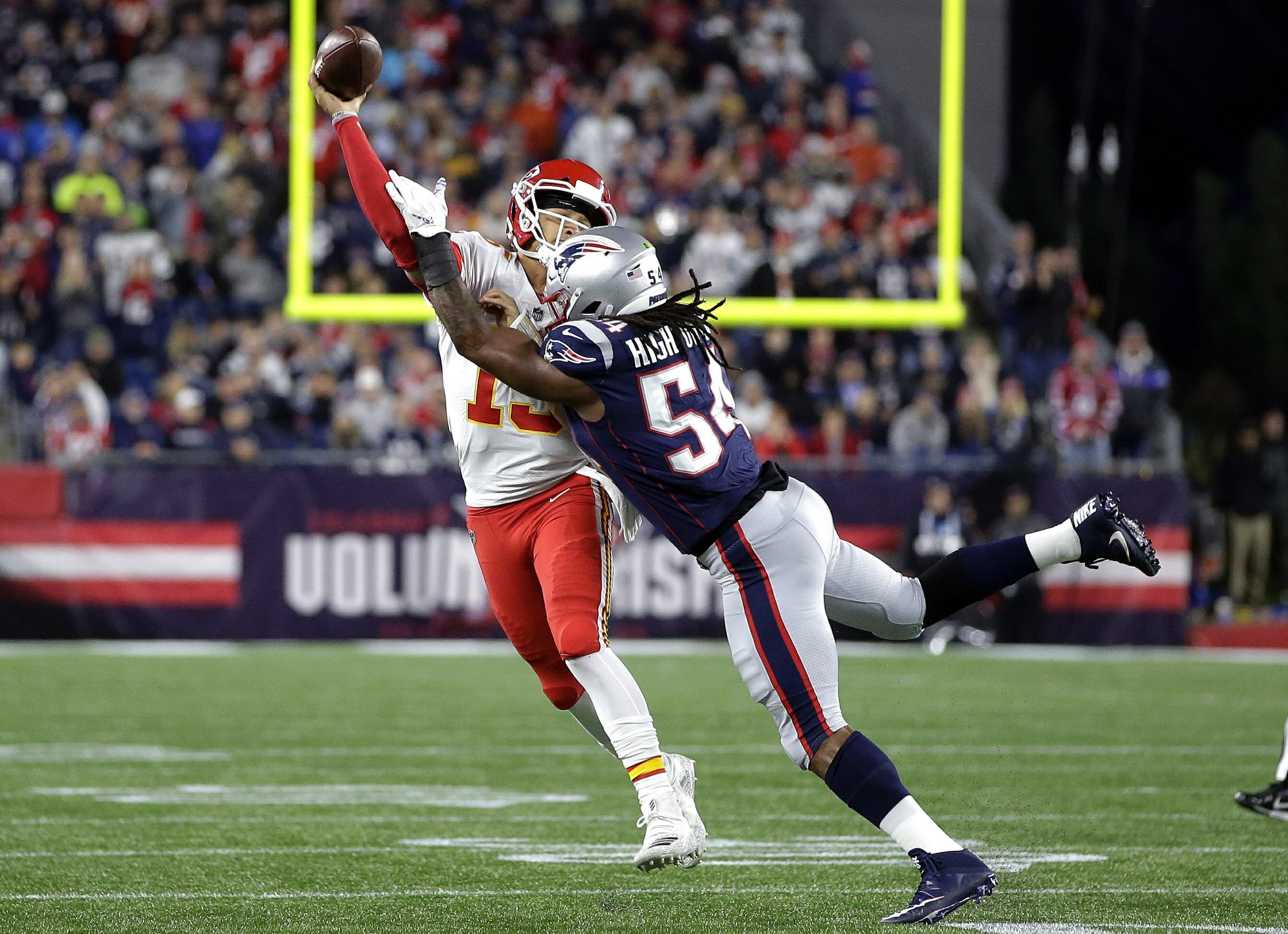 Tom Brady passed for 340 yards and a touchdown and ran for another score in his 200th victory as a starting quarterback, tops all-time. Brady also passed former teammate Adam Vinatieri for most career wins in the regular season and playoffs combined with 227.

The Patriots (4-2) also got another solid performance from rookie Sony Michel, who rushed 24 times for 106 yards and two touchdowns.

It was the first loss of the season for the Chiefs (5-1).

New England led 24-9 at intermission, but Patrick Mahomes directed an impressive rally for Kansas City. He finished 23 of 36 for 352 yards in his first loss as a starting quarterback, with three of his four TD passes going to Tyreek Hill.

Mahomes threw two interceptions in the first half, but was unflappable down the stretch. He found Hill for a 1-yard TD pass that made it 33-30 Kansas City with 8:38 left. With the Chiefs trailing 40-33, he connected with Hill again for a 75-yard score that tied the game with just over three minutes remaining.

Brady used a 16-yard pass to James White and a 39-yard pass to Rob Gronkowski to get New England into field-goal range.

After electrifying the NFL during the first five weeks of the season with his freewheeling style and big arm, Mahomes looked unsure of himself early on.

He was able to complete some long passes to get the Chiefs into the red zone. But he turned the ball over twice in the first half and the high-scoring Chiefs were held to three field goals.

Everything changed in the second half.

First, Mahomes broke through with a 67-yard touchdown pass to Kareem Hunt . That was followed by a 14-yard TD strike to Hill that came on the heels of a fumble by Brady, helping trim New England’s lead to 27-26 entering the fourth quarter.

Tremon Smith took the ensuing kickoff 97 yards down the sideline to the Patriots 3, setting up Hill’s go-ahead TD.

The Patriots responded, using 42-yard pass from Brady to Chris Hogan to help set up a 4-yard touchdown run by Brady that put the Patriots back in front.

Then, after forcing Kansas City into the first punt by either team on the night, Brady got the Patriots some breathing room when he hit Gronkowski for a 42-yard gain. The play set up 50-yard field goal by Gostkowski.

The Chiefs extended their streak for scoring on their first possession in every game this season.

Harrison Butker connected on a 42-yard field goal with 9:05 left in the first quarter, capping an eight-play, 35-yard drive that began after the Patriots turned it over on downs.

The Patriots now have at least one interception in each of their first six games of the season. New England’s last streak of six consecutive games with an INT was in 2013.

New England’s Julian Edelman caught a 17-yard touchdown pass in the second quarter , his first since January 22, 2017, in the AFC championship game against the Steelers

In those 630 days, including the playoffs, Brady threw 54 touchdown passes to 11 different players.

Edelman sat out the entire 2017 season after suffering a preseason knee injury. He missed the first four games this season while serving a suspension for violating the NFL’s policy on performance enhancers.

Chiefs: C Mitch Morse was evaluated for concussion in the second quarter and did not return.

Patriots: Right tackle Marcus Cannon left in the second half with a head injury and did not return.

The Patriots go on the road for the third time this season when they visit the Bears.