NEW ORLEANS (AP) — Huge sculptures of sea life are dotted about New Orleans’ aquarium and zoo , all of them made from plastic trash that washed ashore. There’s a great white shark made partly of bottle caps and beach toys and a jellyfish made mostly of cut-up water bottles.

The artwork, part of a project called Washed Ashore : Art to Save the Sea, is the creation of Angela Haseltine Pozzi, who started making the pieces after seeing plastic heaped by the waves onto Oregon’s southern coast. Pozzi was in the town of Bandon, where her grandparents had lived, mourning her first husband’s death.

“I’d known its beaches all my life,” she said. “I went to the ocean to heal and found that the ocean needed healing.”

She wants the scale of her creations to make people realize just how much plastic gets into the ocean — and to act on that knowledge. Signs next to each piece suggest simple ways to reduce the problem, such as not using plastic straws, re-using water bottles, and picking up other people’s litter.

“Every piece of trash picked up and properly disposed of is a piece that will not cause harm to local environments and animals,” states the sign for “Greta the Great White Shark.” 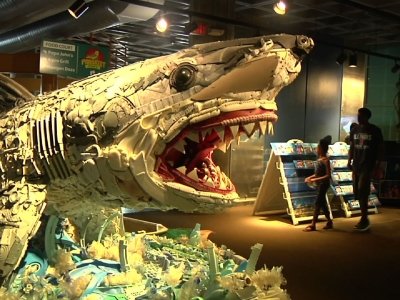 Huge sculptures of sea-life are on display at New Orleans’ aquarium and zoo, all of them made from plastic trash that washed ashore on the Pacific Coast. (July 31)

Pozzi’s aim is art that is “beautiful, and a little horrifying.”

An army of volunteers in Oregon — about 10,000 since Pozzi started in 2010 — help her collect, prepare and assemble the beach trash into art. One of their wash-basins for plastic is a bathtub also found on the beach.

She now has more than 70 pieces in three exhibitions currently traveling the U.S., and has requests from overseas. Her work has been displayed at zoos, aquariums and botanical gardens, and she has permanent exhibits at the Smithsonian Museum of Natural History and a gallery in Bandon.

The Audubon Aquarium of the Americas is currently showing six sculptures, while one of a puffin is on display at the Audubon Zoo; more pieces will be added to both locations in October.

In addition to the shark and two jellyfish sculptures, there’s a walk-through whale ribcage made with bucket lids, bottles, buoys and bait traps; a marlin with a beak made of fishing rods; and percussive “Musical Seaweed.” That statue’s long leaves include metal and plastic bottle caps strung on wires so they rattle when a leaf is hit lightly.

Robert and Lauryn Geosits of Mandeville, Louisiana, were visiting with their three children.

“This is such a great idea for people to visualize just how much trash is in the ocean,” said Lauryn Geosits.

Her husband read from a sign while their baby slept in a stroller and Chelsea, 7, and Preston, 8, searched the shark for the items he named: “There’s a toy car bumper, bottle caps, beach toys, a lighter …”

Asked about the strangest piece she’s used, Pozzi said: “When you’ve processed more than 21 tons of debris into more than 70 pieces of art you’ve seen pretty much everything.”

“One of the most shocking are bleach bottles that have bite marks from fish,” Pozzi said.

A fish made entirely of fish-bitten plastic is among the pieces to be added in October.

Most of the pieces coming to New Orleans this fall are on display at Shedd Aquarium in Chicago, including a river otter, a seahorse and a clownfish in an anemone.

“We are very sad to see them go, because they’ve been very successful,” said Tynnetta Qaiyim (KY-im), vice president for planning and design at Shedd.

She said the response has been far beyond what she expected, both in the number of pictures patrons have posted on social media and in increased conservation awareness.

Qaiyim had thought the exhibit might be more interesting to coastal residents, but said it also connects Midwesterners to the Great Lakes.

“People are talking about plastics and the Great Lakes and the waterways in a way that we were hoping for but not really sure it would happen,” she said.

In New Orleans, the sculptures are in a variety of places and will stay up through April.

“Look! A jellyfish! A jellyfish!” Elliot Harold of Chalmette shouted as he approached a stairway below one of Pozzi’s creations.

“It’s the only thing he’s liked all day,” said his grandmother, Gera Mendel.