Jacksonville won the AFC South and Tennessee earned a wild-card playoff berth out of the division last season.

Now, they get the prime-time spotlight on Thursday even though both are also-rans.

Oh, the Titans (6-6) still are in the playoff chase. But it’s difficult to take serious a team that needs a late rally to beat the Jets.

What’s happened to the Jaguars (4-8) is stunning. One quarter away from winning the AFC in January, they snapped a seven-game slide last Sunday by shutting down Andrew Luck and the Colts 6-0.

The Jags will have running back Leonard Fournette, who was suspended for the Indy game. Tennessee has been vulnerable to the run.

“Getting him back is going to be a huge boost, especially for our team,” safety Tashaun Gipson says. “We’re a physical team and we want to run the ball, get your playmakers the ball, and obviously he’s the best player we have on the offensive side of the ball.”

The Titans’ best offensive player is, well, that’s a tough one. They rank 28th overall in yardage and only four teams have scored fewer than Tennessee’s 221 points. 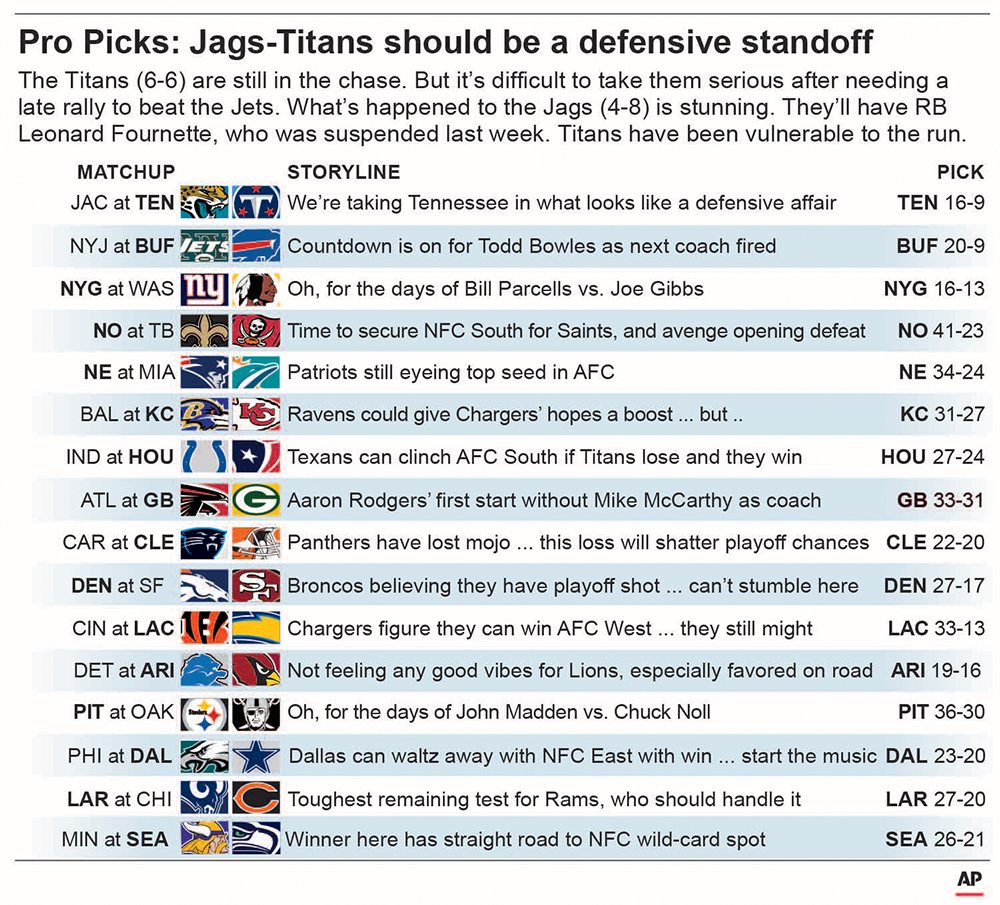 KNOCKOUT POOL: Seattle did the job with a romp last week, and now we expect something similar from DENVER.

Not feeling any good vibes for Lions, especially when favored on road.

Texans can clinch AFC South if Titans lose and they win.

Chargers figure they can win AFC West. Guess what: they still might.

Ravens could give Chargers’ hopes a boost. But …

Toughest remaining test for Rams, who should handle it.

Cowboys can pretty much waltz away with NFC East with win. Start the music.

Oh, for the days of John Madden vs. Chuck Noll.

Oh, for the days of Bill Parcells vs. Joe Gibbs.

Panthers have lost their mojo. This loss will shatter playoff chances.

Countdown is on for Todd Bowles as next coach fired.