Josh Smith and LSU never had any doubt.

The Tigers entered the 2019 campaign with incredibly high expectations. Despite bowing out of the 2018 Corvallis Regional in ugly fashion, they entered the spring with a loaded and hungry roster and ranked No. 2 in the country. In essence, anything but a trip to the College World Series with a chance to win the program’s seventh national title would be considered a failure by those in Baton Rouge.

LSU still must win two games to make yet another trip to Omaha, but it’s back in this situation yet again after beating Southern Miss 6-4 in a hard-fought regional championship. LSU moves on to face Florida State, another program chasing history on behalf of legendary coach Mike Martin.

“Honestly, this team has known the whole year that we’re pretty good,” Smith said. “We knew if we were going to get some pitchers back healthy, we’ve had a chance to go a long way. A lot of people were kind of doubting us a little bit, but we got back up and we’re hosting a super regional. I’m pretty excited.”

While the Tigers are moving on after beating the Golden Eagles, there were plenty of instances throughout the season where LSU fans were in the right to wonder what to make of this team. Take some of the early samples as reasons for concern. LSU hit the road to Texas the second weekend of the season and played dreadful. Not only did the Tigers play bad, they were swept by the Longhorns, a club that finished dead last in the Big 12 Conference.

LSU regrouped from that series and won a hard-fought series at home over California before disposing of Kentucky to begin Southeastern Conference play. But life in the SEC can be difficult, especially when you’re banged up and inconsistent. LSU dropped a series at Georgia before getting back on track for a couple of weekends with series wins over Mississippi State and Texas A&M. The Tigers had the same back and forth formula throughout conference play, but showed some chinks in the armor, or so we thought, with back-to-back series losses to Ole Miss and Arkansas before closing out regular season play with a must-win series win over Auburn to stay in the regional hosting hunt.

You know the rest of the story. The Tigers headed top Hoover, their home away from home, for the SEC tournament and did exactly what they needed to do to garner a host spot. It wasn’t quite punching a ticket to Omaha, but it was a big first step on the road to TD Ameritrade Park. 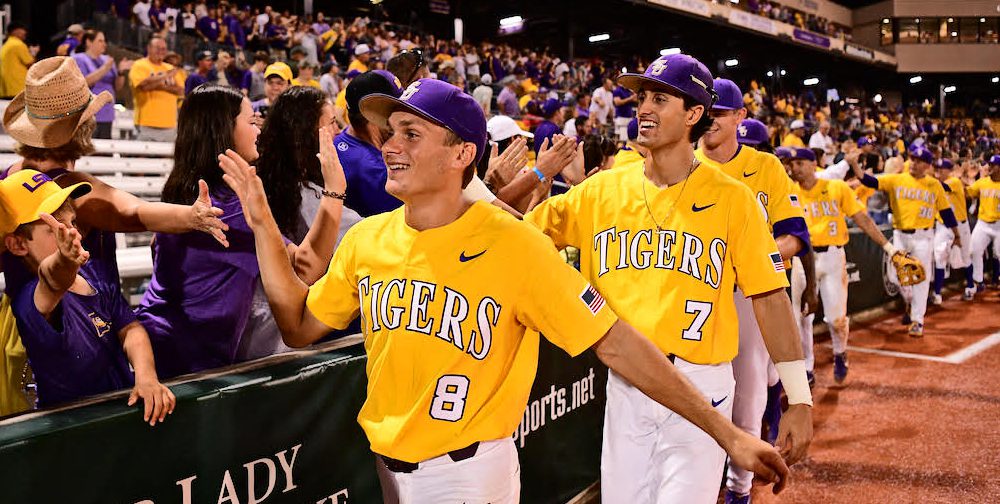 “There’s a self confidence in each other with this team and it’s a vital aspect of any successful team. We’ve had some changes throughout the year and I kept telling them don’t get down, we’re going to get better,” Mainieri said. “We won six of our 10 SEC series, and it wasn’t the best regular season we’ve had, but it also wasn’t terrible.