NEW YORK (AP) — What do you hate shopping for? Toothpaste? Diaper rash cream? Sunscreen? The guys who founded Harry’s shaving club spend a lot time thinking about this question.

The startup, which took on razor giants Gillette and Schick with its direct-to-consumer subscription model, has since expanded into traditional retail and launched a line of body care products. Armed with $112 million in new financing to develop new brands, the company now is investigating what other sleepy products might be ripe for disruption.

“Our vision is to build a next-generation consumer brand company,” said Jeff Raider, who recently took on the role of CEO of Harry’s Labs, overseeing the development of new brands. “It might be better products, a better experience getting the products or a brand that appeals to who they want to be as people.” 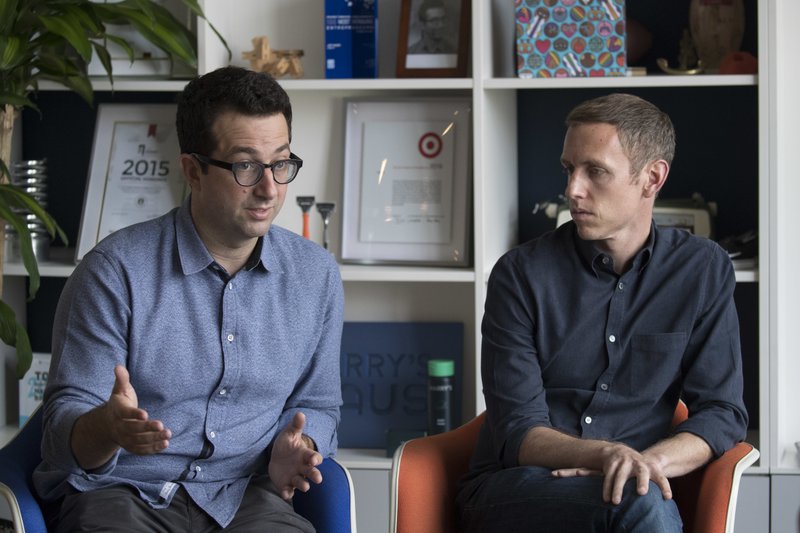 There’s a reason why Harry’s investors are betting that reinventing the razor was no flash-in-the-pan idea. Insurgent brands are shaking up the way people buy everything from mattresses to prescription acne remedies, eating into the market share of big consumer product companies and leaving them scrambling to respond.

‘NO CATEGORY IS IMMUNE’

Eager venture capitalists, digital technology and social media make it easier for anyone with a good idea to enter the consumer goods market, according to a report on insurgent brands by Bain & Company, a management consulting firm. Contract manufacturing, which allows companies to outsource production and sometimes defray costs, also has made it simpler.

“The reality is that no category is immune to disruption,” the Bain & Company report said.

Digital newcomers still represent only a fraction of the overall market share, according to the report, which analyzed sales data from IRI market research firm for 90 goods categories. Startup brands accounted for only 2 percent of market share across 45 product types they disrupted from 2012 to 2016, the report said. But such companies captured a quarter of the growth in that time.

Being small is often a tactical advantage, allowing fledgling companies the freedom to focus on a core product, shoring up visibility among a targeted group of consumers, while bigger brands are forced to defend their market share across a wider base.

Harry’s has captured about 2 percent of the $2.8 billion men’s shaving industry since its launch in 2013, according to Euromonitor market research firm. Its main shaving club rival, Dollar Shave Club, has about 8 percent.

It’s been a gut punch to the industry leaders.

Gillette controlled about 70 percent of the U.S. market a decade ago. Last year, its market share dropped to below 50 percent, according to Euromonitor. The company, owned by P&G, was forced to slash its razor prices by an average of 12 percent last year.

No. 2 razor maker Schick has also been squeezed. Parent company Edgewell Personal Care reported a 3.6 percent drop in net sales from its North America shave business in its most recent earnings report.

Both major brands now offer subscription services on their own direct-to-consumer sites, which they are leveraging to promote their lower-end razors while also showcasing their edge in technological innovation.

“Our blades are known for their long-lasting quality, which means you need less cartridges per year as compared to the other shave clubs in the market,” said Stephanie Lynn, vice president of Global eCommerce for Edgewell.

Pankaj Bhalla, brand director of Gillette North America, said increasing its online sales is a “key part of our strategy.” He offers a reality check for the shave clubs: While Gillette might be new to the direct-to-consumer game, the brand says it has 70 percent of the market share on online retailers like Amazon and Jet.com.

But critics say both incumbents were slow to respond to the new competition.

“Initially, the biggest players underestimated the potential of these brands, and when they reacted either by dropping prices or by launching their own subscription models, the damage was done,” said Fatima Linares, beauty and fashion research manager at Euromonitor International. “It’s still unknown what these companies will do to revert the situation, or if that is possible at all.”

It was a different era when salesman King C. Gillette invented the disposable safety razor at the turn of the last century.

Clean-shaven faces were synonymous with virtue and manliness, a Western preoccupation that dates back to when Alexander the Great ordered his men to scrape off their beards before battling the Persian armies in 331 B.C., according to Christopher Oldstone-Moore, historian and author of the book, “Beards and Men.”

Gillette has since become one of the world’s most ubiquitous brands, with its razors sold in virtually every country. It has rolled out fancier and more expensive razors every few years.

But in a more relaxed era where stubbles and beards are making a comeback, premium razors started to lose their luster.

Dollar Shave Club beat Harry’s to the punch, bursting onto the scene with its 2012 viral YouTube video that ridiculed the technological innovations that have been a source of pride for Gillette.

The online startup’s sales soared from $4 million in its first year to more than $150 million by the time it was sold for $1 billion to Unilever in 2016, P&G’s main competitor.

While Dollar Shave Club started a price war, Harry’s founders set out to offer premium design at an affordable price.

CEO Andy Katz-Mayfield said the idea came him during a 2011 visit to a drug store, where he had to ask an employee to unlock a case to spend $25 for blades and shaving cream.

He soon called Raider, a friend who had already co-founded Warby Parker, the eyeglasses company that upended an industry virtually monopolized by Italian firm Luxottica. Katz-Mayfield persuaded Raider to do the same for razors.

They were soon scouring the world for quality blades, finally tracking down a German factory that produces the Croma. Raider and Katz-Mayfield secured a deal for custom-made blades and eventually bought the plant in a $100 million gamble.

They teased their 2013 launch with an innovative social media campaign that offered free products to anyone who signed up for company updates, sweetening the deal for those who referred the most friends. By launch day, they had the emails of 100,000 people for marketing purposes.

Harry’s says it now has 6 million customers in the U.S. and Canada. It says business has grown 70 percent year-over-year in North America, though it does not release sales figures.

It is a deliberate contrast to the dizzying array of razors offered by Gillette and Schick, the legacy of their century-old tradition of trying to outdo each other. Their lower-end products are priced comparatively with the shaving clubs, while their premium razors are much pricier.

“The average guy does not like shopping and comparing 27 different things,” said Katz-Mayfield, the Harry’s CEO.

But Schick and Gillette are not about to abandon their tradition of rolling out flashy new inventions, still critical to defending their positions as the premier brands in shaving.

Gillette is testing a razor designed for caregivers who shave elderly men and has launched an Indiegogo campaign to gauge interest in a new $150 heated razor.

“There is no one type of shave for every man in America. Whatever every person needs, we have a solution for you, and that is what Gillette is,” Bhalla said.

How the newcomers compare in quality is a matter of furious social media debate. Harry’s gets its share of negative reviews from customers who say its razors feel cheap, but others are fiercely loyal.

Greg Lesko, a 56-year-old from the Pittsburgh area, said he became “fed up” with Gillette’s high prices.

“I figured there was nothing to lose so I gave Harry’s a try,” said Lesko, a client support specialist at a prescription benefits management company. “I wouldn’t go back if you paid me.”

IF YOU CAN’T BEAT THEM, EAT THEM

One way for big consumer goods companies to disarm the competition is to swallow them whole.

Unilever’s purchase of Dollar Shave Club points to that trend and bodes well for the future of upstart digital brands, said Brian McRoskey, co-author of the Bain & Company report.

Edgewell has acquired two trendy men’s skincare brands, Texas-based Jack Black and the U.K. company Bulldog. The company plans a direct-to-consumer site in the U.S. for Bulldog, which unveiled its first razor in June, marketed as eco-friendly with a bamboo handle.

Insurgent brands have turned out to be an opportunity for major retailers trying to compete in the Amazon age, said Tim Barrett, a senior analyst at Euromonitor International. Walmart bought fashion brands Bonobos and ModCloth to drive online sales, “a key component of its e-commerce strategy,” Barrett said.

Meanwhile, online brands are finding that shoppers are not done buying razors or mattresses in stores.

Casper, an online mattress retailer, started opening stores because so many customers were showing up at its New York offices asking to try out mattresses.

Raider said Warby Parker had a similar experience and he wasn’t surprised to discover that many men still like buying razors in stores. The company started selling its razors at Target in 2016 and struck a partnership with Walmart this year.

As they go mainstream, the challenge for new brands to keep from becoming one more razor on the shelf or mattress at the mall. Retailers, eager for foot traffic in the digital era, are happy to help hipster brands stand out.

Nordstrom’s has made room for Casper and other online brands through a pop-up series. Harry’s got coveted end-of-aisle space at Target, featuring a giant orange razor.

Like other insurgent companies, Harry’s and Dollar Shave Club took off because they tapped into shoppers’ grievances.

Casper’s, which lets customers try mattresses at home for 100 nights, grew out of the premise that it’s no fun shopping for a big, bulky item that’s hard to test out.

The start-up Hims, which counts Harry’s as a minority stakeholder, launched last year to give men a more comfortable way to shop for hair growth and erectile dysfunction drugs.

“What sets them apart is a compelling offer that addresses a real unmet consumer need,” said Bain & Company in its report.

Raider said he hopes to mine the 2 million interactions Harry’s has had with customers to find more gripes.

On Facebook, Harry’s told one curious customer that shampoo and conditioner are in the works.

Another possibility? Sunscreen. Raider says it’s expensive and should be marketed for everyday use, not beach trips.

“A lot of just comes from talking to people, like, ‘hey, what do you want to be better in your life?’” Raider said. “What upsets you?”

They’re also not ruling out products to help men take care of beards.

“It will take time for us to understand those guys,” the clean-shaven Raider said. “Maybe Andy and I will have to grow big beards.”

Fox plans to sell stake in Sky to Comcast for $15B

Texas takes it: Dallas-area kids are tops at spelling bee