NORRISTOWN, Pa. (AP) — The woman Bill Cosby was convicted of sexually assaulting tweeted “Truth prevails” Friday, the morning after a jury came back with a verdict that could send the 80-year-old comedian to prison for the rest of his life.

After decades of whispers, lawsuits, investigations and close calls, Cosby was found guilty Thursday of drugging and molesting Temple University employee Andrea Constand at his suburban Philadelphia mansion in January 2004.

The verdict also led Temple University on Friday to revoke Cosby’s honorary degree from the school. Cosby long served as a leading public face and a key fundraiser for the school, which was among few that waited to pull honors from Cosby until after the verdict.

Cosby frequently turned out to support the school’s men’s and women’s basketball teams, an interest that connected him with Constand, who managed the women’s team.

Thursday’s ruling was hailed by women’s advocates as a turning point in the #MeToo movement and was seen as vindication by a multitude of women who doubted anyone would ever believe their word against that of America’s Dad.

Lili Bernard, who said Cosby sexually assaulted her before giving her a one-time role on “The Cosby Show” in 1992, became so emotional in the courtroom gallery that she accidentally banged her forehead on the bench in front of her.

“I’m overcome with gratitude,” Bernard, sobbing, said outside the courthouse. “I feel like I have to pinch myself. Am I awake? It’s a miracle.”

The verdict in the first big celebrity trial of the #MeToo era sealed the spectacular late-in-life downfall of an entertainer who broke racial barriers in Hollywood on his way to TV superstardom as sweater-wearing, wisdom-dispensing Dr. Cliff Huxtable.

“A very profound and heartfelt thank you to the Commonwealth of PA, Montgomery County, for their service and sacrifices. Congratulations,” Constand said on Twitter. “Truth prevails.”

It was the only criminal case to arise from a barrage of allegations from more than 60 women who said Cosby drugged and molested them over five decades but whose stories were often disbelieved or ignored years before #MeToo put a spotlight on sexual misconduct by powerful men.

Cosby stared straight ahead as the verdict was read but moments later lashed out loudly at District Attorney Kevin Steele after the prosecutor demanded Cosby be sent immediately to jail. Steele told the judge they’d learned through the trial that Cosby has an airplane, and feared he could flee.

Cosby angrily denied he has a plane and called Steele an “a–hole,” shouting, “I’m sick of him!”

Judge Steven O’Neill decided Cosby can remain free on $1 million bail while he awaits sentencing but restricted him to Montgomery County and the mansion where the encounter with Constand occurred.

Cosby was convicted of three counts of aggravated indecent assault, each carrying a standard sentence of five to 10 years in prison. The counts are likely to be merged for sentencing purposes, but given Cosby’s age even a modest term could mean he will die behind bars.

Cosby accuser Janice Baker-Kinney, who alleges he drugged and raped her in 1982, told ABC’s “Good Morning America” on Friday that it is essential Cosby spend time in jail. She said she wouldn’t be heartbroken if he spent the rest of his life in jail and even died in prison.

Sentencing will likely be held within three months. Before that, Cosby must face assessment to determine if he is a sexually violent predator. He will also be required to register as a sex offender under Megan’s Law.

Bernard told NBC’s “Today” show on Friday that her hope is Cosby’ sentence matches the severity of his crimes.

“Hopefully his sentencing will reflect the magnitude of the damage and havoc he has wreaked,” she said.

The jury of seven men and five women deliberated 14 hours over two days before convicting Cosby.

Cosby spokesman Andrew Wyatt told “GMA” on Friday that Cosby is feeling great one day after the verdict. He said Cosby was spending time with his wife, Camille, is confident that he did nothing wrong and maintains his innocence.

Constand, a former Temple University women’s basketball administrator, said Cosby knocked her out with three blue pills he called “your friends” and then penetrated her with his fingers as she lay immobilized, unable to resist or say no. Cosby claimed the encounter was consensual, saying he gave her the cold and allergy medicine Benadryl to relax.

Cosby waved to the crowd outside the courthouse, got into an SUV and left without saying anything. His lawyer Tom Mesereau declared “the fight is not over” and said he will appeal.

Shrieks erupted in the courtroom when the verdict was announced, and some of Cosby’s accusers whimpered and cried. Constand remained stoic, then hugged her lawyer and members of the prosecution team.

The verdict came after a two-week retrial in which prosecutors had more courtroom weapons at their disposal than they did the first time: They put on the stand five other women who testified that Cosby, married for 54 years, drugged and violated them, too.

At Cosby’s first trial, which ended in a deadlocked jury less than a year ago, only one additional accuser was allowed to testify.

“Justice has been done!” celebrity attorney Gloria Allred, who represented some of Cosby’s accusers, said on the courthouse steps. “We are so happy that finally we can say women are believed.”

The district attorney became teary-eyed as he commended the 45-year-old Constand for what he said was courage in coming forward. As Constand stood silently behind him, Steele apologized to her for a previous DA’s decision in 2005 not to charge Cosby.

Cosby “was a man who had evaded this moment for far too long,” Steele said. “He used his celebrity, he used his wealth, he used his network of supporters to help him conceal his crimes.”

He added: “Now, we really know today who was really behind that act, who the real Bill Cosby was.”

Since Cosby’s first trial, the #MeToo movement has taken down powerful men in rapid succession, among them Harvey Weinstein, Matt Lauer, Kevin Spacey and Sen. Al Franken. During closing arguments, Cosby’s lawyers slammed #MeToo, calling Cosby its victim and likening it to a witch hunt or a lynching.

Cosby’s new defense team, led by Mesereau, the celebrity attorney who won an acquittal for Michael Jackson on child-molestation charges, launched a ferocious attack on Constand during the trial, calling her a “con artist” and “pathological liar” who framed Cosby to get rich.

Cosby’s defense team derided the other accusers as home-wreckers and suggested they made up their stories in a bid for money and fame.

But Cosby had long ago confirmed some of the rumors about drugs and extramarital sex. In a deposition he gave more than a decade ago as part of Constand’s lawsuit, he acknowledged he had obtained quaaludes to give to women he wanted to have sex with. 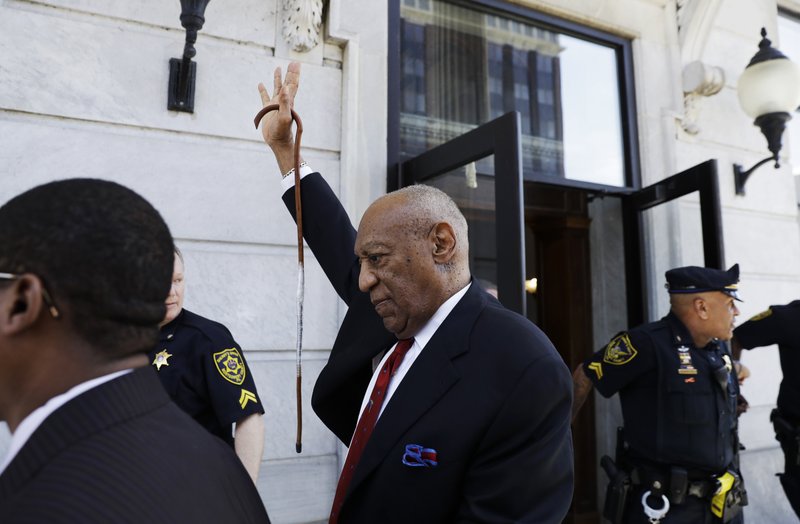 Cosby gestures as he leaves the courthouse after the verdict. (AP Photo/Matt Slocum)

A federal judge, acting on a request from The Associated Press, unsealed portions of Cosby’s deposition about quaaludes and sexual conquests in 2015, citing the disconnect between Cosby’s private behavior and his reputation as a public moralist.

That prompted authorities to reopen the criminal investigation, and they eventually brought charges.

The Associated Press does not typically identify people who say they are victims of sexual assault unless they grant permission. Constand has done so.

Cosby gets pair of key rulings, but not ‘bandwagon’ juror

Cosby judge rejects demand to step aside over wife’s work